Places to visit in Bhutan 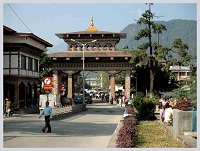 Phuentsholing (alt. 300m / 985 ft) – The frontier town, it is a thriving commercial centre, situated directly at the base of Himalayan foothills. It is a fascinating place where different ethnic groups mingle prominently Indian, Bhutanese and Nepalese. Being the border town, Phuentsholing serves as the convenient entry/exit point for Bhutan and also the important link to visit the Indian state of West Bengal, Sikkim and Assam. Phuentsholing is the point of entry for travelers arriving by bus from Kolkata and Siliguri and the town functions primarily as a place where Bhutanese and Indians do business. 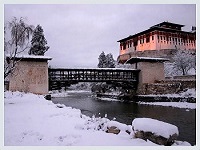 Paro (alt. 2200m/7218ft) – The beautiful valley of Paro encapsulates within itself a rich culture, scenic beauty and hundreds of myths and legends. It is home to many of Bhutan’s oldest temples and monasteries, National Museum and country’s only airport. Mount. Chomolhari (7,314m) reigns in white glory at the northern end of the valley and its glacial water plunge through deep gorges to form Pa Chhu (Paro river). Paro is also one of the most fertile valley in the Kingdom producing a bulk of the locally famous red rice from its terraced fields. 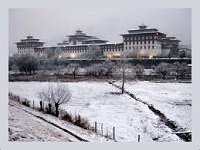 Thimphu (alt. 2400m/7875ft) – The capital town of Bhutan and the centre of government, religion and commerce, Thimphu is a unique city with unusual mixture of modern development alongside ancient traditions. Although not what one expects from a capital city, Thimphu is still a fitting and lively place. Home to civil servants, expatriates and monk body, Thimphu maintains a strong national character in its architectural style.  In 2008, the national stadium was completed together with a new river-side park. The area around the dzong and government buildings is a particularly green. 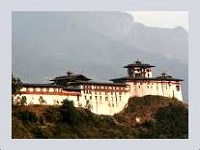 Wangdue Phodrang (alt. 1300m./4265ft) – Wangdue Phodrang is the last town on the central highway before central Bhutan. The town is not more than an enlarged village with a few well-provided shops. Located in the south of Punakha, the higher reaches of the Wangduephodrang valley provide rich pastureland for cattle. This district is also famous for its fine bamboo products, slate and stone carvings. There are three paved roads in Wangdue Phodrang dzongkhag. The Lateral Road enters from the west at Dochu La Pass, crosses the Pana Tsang Chhu at Wangdue Phodrang dzong, and continues east to Tongsa. 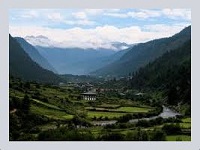 Gangtey (alt. 3000m/9845ft) The valley of Gangtey is one of the most beautiful spots in Bhutan. The surprise of finding such a wide, flat valley without any trees after the hard climb through dense forests is augmented by an impression of vast space, and extremely rare experience in Bhutan where most of the valley’s are tightly enclosed. A few kilometers beyond the Gangtey Monastery, on the valley floor lies the village of Phobjikha. This place is the winter home of black necked cranes that migrate from the arid plains in the north to pass winter in milder and lower climate. 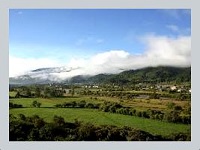 Bumthang or Jakar valley (alt. 2600m-4500m / 8530ft-14765ft) Bumthang has an individuality that charms its visitors and separates it from other regions. Comprising of four smaller valleys namely Tang, Ura, Choekhor and Chumey, the deeply spiritual region of Bumthang is shrouded in religious legend. Bumthang is also the traditional home to the great Buddhist teacher Pema Linga to whose descendants the present dynasty traces its origin.

Place To Visit in Bhutan